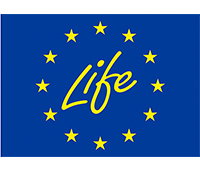 This program facilitates the integration of environmental aspects into other policies generally contributing to a sustainable development.

The LIFE program is managed by the European Commission (DG Environment and DG Climate Action).

The LIFE Project 13NAT / ES / 001130“Restoring the natural feeding habitat of the black vulture and other carrion birds in Central Spain” (LIFE FEEDING SCAVENGERS), is part of the project called LIFE + Nature and Biodiversity, in which the EU co-finances projects for conservation actions of listed threatened species in the annexes of the EU’s Habitats Directive, the EU Birds Directive and the European Red List IUCN, within the territories in the European Union that make up the Natura 2000 network.