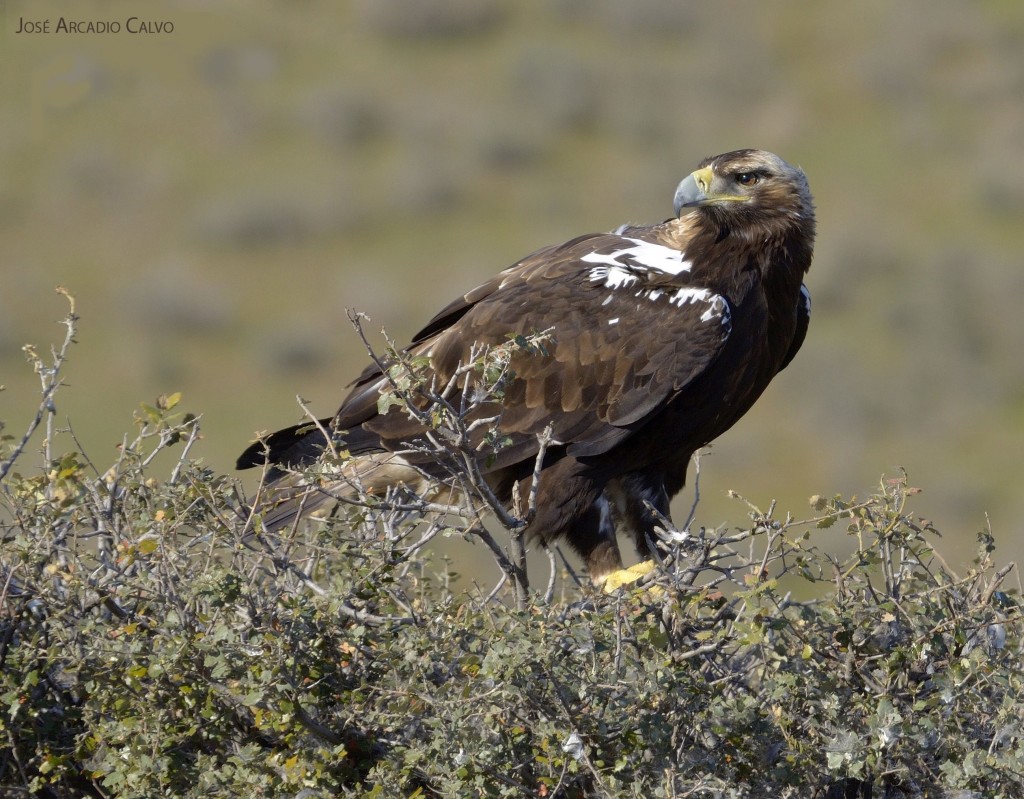 A large and robust eagle, weighing in at around 3-4kg which wingspan can exceed two metres, and a length of 72-83cm. Their plumage goes through several stages until it reaches their typical adult appearance, characterized by a dark brown coat and a cream coloured neck and crown, in which an intense white stands out around the shoulders area and the covering feathers of the leading edge of the wing. The juveniles are a reddish brown except for the flight feathers and tail which are dark. As they moult their feathers darker ones start appearing giving them their characteristic mix of dark and light feathers called damero (checkerboard). They obtain their adult plumage at 5 or 6 years of age. During their courtship display and during the breeding season they emit a trademark “gok-gok-gok” or “krau, krau, krau”, which can be heard at great distances.

Habitat: They can be found in forested areas with Mediterranean climate, with little human development and high rabbit densities. The preferred nesting territories include woodland plains; in pine groves and grasslands, holm oaks and corn oaks of the Mediterranean forest, as well as alpine woods and subalpine conifers and Mediterranean pines. During the dispersal juveniles and immature adults select temporary areas of crops and pastures with little tree cover.

Nutrition: the diet of this species is based on lagomorphs, especially rabbits, although it has a great geographical variability depending on the abundance of local prey, mainly vertebrates, and it won’t waste an opportunity to scavenge especially during the winter or by juveniles.

Reproduction: The reproductive cycle begins with the preparation of the nest and the first mounts at the start of February. They lay 3-4 eggs generally throughout March, and incubation lasts around 40-42 days. The chicks stay in the nest for 65-78 days, and remain dependant on their parents for another 50 days. They leave the nesting grounds and start dispersal by September.

Monotypic species, whose area of global distribution is limited to the western south and centre of the Iberian Peninsula. Since the end of the XX century their distribution area has been growing as they started to reproduce in Portugal, becoming more noticeable as well in northern Africa where wandering and wintering individuals have been spotted.

Electrocution and poisoning are the principle causes of unnatural mortality. The lack of food due to the decline in rabbit populations in many areas, caused by myxomatosis and haemorrhagic pneumonia from a viral origin, has abruptly lowered the productivity of many pairs. Other causes include the reproductive failure due to the disturbance caused by human activities.